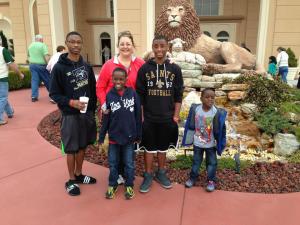 It’s been just over a month since we’ve been home.  The boys are settling in well and making friends and we just took a vacation for over a week.  I wondered if they would be overwhelmed, but overall they managed very well.

Lowenski will officially become Peter in the next few weeks.  He is currently in the 4th grade and while he was never able to read while in Haiti, he is picking things up very quickly here.  His first day of school on March 11 was awesome.  He came home with a picture and a letter from every student in his class welcoming him to America and to school at his elementary.  He was so proud.  He’s made a friend in the neighborhood and is often out riding his bike around the block.  His favorite American food is grilled cheese sandwiches!

Daveson, soon to be David is in Kindergarten at the same school with Peter.  He’s working on writing his letters and counting to 30 and 100 in English.  He can count to 30 easily in French.  He loves his teacher and his classroom.  But nothing lights up his face more than when Marley comes over! 🙂 He is so sweet to her and she to him.

Healthwise, they are both doing great – gaining weight and growing.

We had a few adjustments as a family to make with their arrival, but overall, Marcus and Denny have been incredibly helpful with their little brothers.  Yesterday was a banner day when we went to Silver Dollar City in Branson and everyone was laughing and having a great time.

We still occasionally have some “You’re not my real mom moments”, but they are becoming few and far between.

We so appreciate your prayers for our family.  I truly believe things are going as well as they are because so many people are covering our family in prayer.

I'm a married and working mother of 6. As a disciple of Christ, I seek to change the world by living out the command to love my neighbor as myself and helping others find Jesus and follow him. I blog at natalieames.org. View all posts by Natalie Ames